…. what every lawyer should know 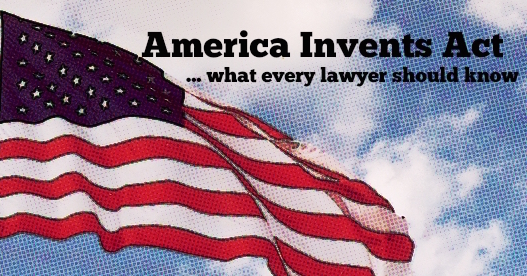 The America Invents Act (the AIA) is the law of the land effective March 16, 2013. By far, the most dramatic change implemented by the AIA is that the first inventor to file has priority among all others claiming the same invention. 35 U.S.C. §102. Under this change, the United States transitions from a first to invent patent system to a system where priority is given to the first inventor to file a patent application. This is the patent priority system employed by most of the other countries in the world.

Another stark change from the old patent system implemented by the AIA is that now an assignee of a patent application (typically the company who employees the inventor) can prosecute the application in the assignee’s name. This provision also allows the assignee to file a substitute statement (oath) where the inventor is unwilling or unavailable.

In broad strokes, the reforms implemented by the AIA, applicable to the day-to-day practice before the United Stated patent and Trademark Office (“USPTO”) fall into four categories:

(iv) Accelerated Examination and Micro Entities. This article will briefly discuss each reform and provide some background on what the specific reform will look like in practice.

The America Invents Act – The First Inventor To File

The “Filing Reforms” impact Sections 3, 4, 10, 15 and 33 of 35 U.S.C. §1, et seq. Specifically, and as mentioned above, Section 3 now provides that the first inventor to file has priority instead of the first inventor to invent effectively creating a race to the patent office. Section 4, again as mentioned above, allows for the assignee of the application to be the applicant on the patent application from the outset. Section 10 penalizes paper filings with the USPTO; there is a $400 ($200 for small entities) fee for filings made by non-electronic means. Section 15 provides that a patent may not be cancelled or invalidated (in litigation, arguing that the patent is invalid is usually one of the stronger defenses available for an alleged defendant infringer) based on the failure to disclose “the best mode” for carrying out an invention. Section 23 prohibits the grant of a patent for human organisms.

The “Examination Reforms” impact the give and take which occurs between the patent applicant (usually through its attorney) and the USPTO through the examiners. The Examination Reforms impact Section 3 of 35 U.S.C. §102 and add a new section of prior art. Specifically, prior art for an examiner to consider is no longer just “on sale, used in public, published or patented” but now also includes “or otherwise available to the public.” Also, under §102(b) the publication of a claimed invention by the inventor less than 1 year before filing of a patent application may not act as prior art in an examination setting with an examiner at the USPTO.

The “Third Party Participation Reforms” seem to be designed to push more patent validity issues (basically, did the examiner get it right when the patent was granted in the first instance) back to the USPTO for decision. Section 6 calls for expanded inter partes review. Inter Partes Review allows a third party to petition the USPTO 9 months after the grant of the patent or the conclusion of a Post Grant Review (see below), whichever is later, to cancel at least one claim as unpatentable under §102 or §103 based on patents or printed publications. Section 6 also allows for the Post Grant Opposition System. A Post Grant Review allows a third party to seek cancellation of claims in issued patents on any validity grounds, except best mode. A Post Grant review must be filed within 9 months of the patent being issued. The standard for the grant of Post Grant Review is “more likely than not that at least one claim is unpatentable”; or, the Post Grant review petition raises a novel or unsettled legal question.

Another third party review system available involves covered business method patents (e.g., methods for allocating risk on investments, method for charging fees or allocating losses over a large number of accounts). This mechanism allows a party sued for infringement of one of these covered business method patents to seek review of the validity of the patent in question with the USPTO.

The Accelerated Examination Program and the recognition of Micro Entity status provide for a quicker patent prosecution and the reduction in patent filing fees of up to 75% for small inventors. Accelerated Examination allows for expedited examination at the USPTO for a one time additional fee, paid up front, of up to $4,800. The goal here is to have the application reach final disposition (granted or rejected) within 1 year from filing. The typical time frame from filing to final office action is about 3 years.

To qualify as a Micro Entity, the inventor must not have been named as an inventor on more than 4 patent applications in the last year, did not have a gross income of three times the median household income in the U.S. (about $150,000-$170,000). Of course, being under an obligation to assign the patent to a non-Micro Entity will destroy an inventor’s Micro Entity status.

The patent truth, did you know…

WD-40(Water Displacement, 40th formula) was never patent protected. The ubiquitous rust inhibitor found in shops and garages everywhere first became commercially available in 1958. Apparently, the product was not patented in 1953 to avoid disclosing the details of its composition. Instead, the formula is and remains a trade secret.

Please contact us with questions or comments … the Patent Guys

Sign Up Now
For Email Marketing you can trust.